At the time of posting (April 2022), travellers to the US are required to obtain a negative COVID test result no earlier than the day before they fly*.

To be frank, waiting to take these tests is terrifying - if you fail, you ain’t travelling!

We were lucky in that, with the exception of Dan (who had to go into work), we were able to isolate for around 12 days before our tests.

(This did however trigger flashbacks from lockdown #1, stuck at home alone with both boys 😂)

As it’s an FAQ over on Insta, I thought I’d share a review of our testing experience.

This will soon be followed by a second post sharing our experience using Virgin FlyReady, flying from Manchester to Orlando with 2 children.

If you have any questions, please let me know - I’m happy to update the article. Just drop me a message over on the CrosswalkClan Instagram account or Facebook page.

*Unless they have an exception - of which the only common one is having had COVID within the previous 90 days AND being able to satisfy the CDC Documentation of Recovery requirements.

Having previously used - and loved - Qured (who are ultra professional, flexible & reliable but definitely not the cheapest - though code BATRAVEL20 helps, giving 20% off), I was nervous to go elsewhere for our family holiday.

But so many of you over on Instagram kept asking for my thoughts about DocHQ, or recommending them to me after a good experience, so I was really keen to try out and review a cheaper option for you guys.

So I took the plunge and headed to DocHQ’s website…

I bought our tests (as well as the aforementioned spares, just in case the kids dropped a swab or something equally disastrous) from Boots. 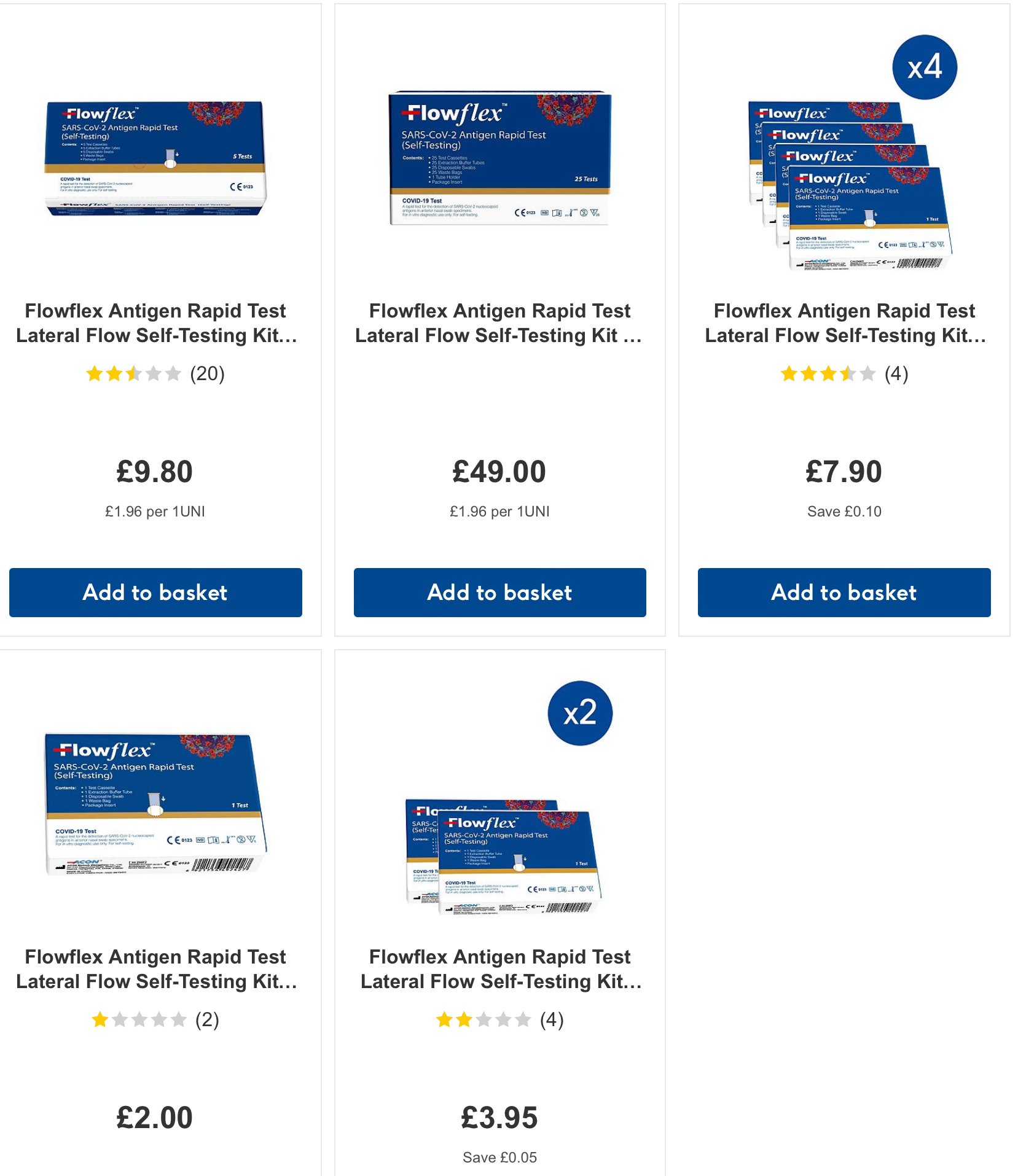 Bought individually they cost £2 each, but the per test price goes down the more tests that are in the box - down to £1.96 each. I believe you can also buy them at places like B&M.

Please note - on the Boots product listings it states that these tests are not suitable for travel use - this is only because the test on it’s own is not sufficient for travel, as it doesn’t provide a certificate.

But performed in conjunction with a video appointment from a private company it is perfectly acceptable - and it is included in the list of approved tests that DocHQ allows you to use with it’s supervision packages. 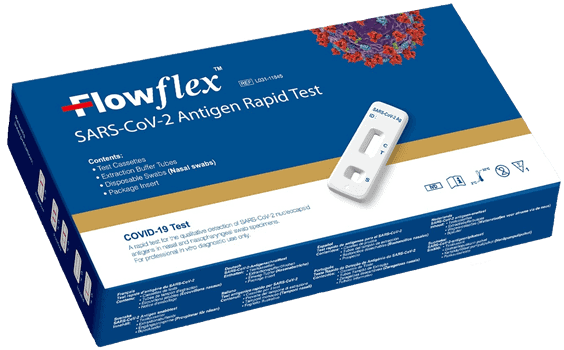 Also please note that the bad reviews appear to be all from people who need to be able to report their results to the government/NHS for work purposes - again not something these tests support when used independently of any third party.

One thing to remember - you cannot use FlowFlex tests that you were given by the NHS for these private travel tests. The NHS ones do show clearly on the box that they are NHS-supplied and you have to open the box on camera during your video appointment - DocHQ specifically prohibits their use.

DocHQ do offer a full test service, where they supply the tests as well as the video appointment and certificates but, for the purposes of this article I didn’t want to spend a penny more than necessary, so chose to supply our own (the option in the pink column below). 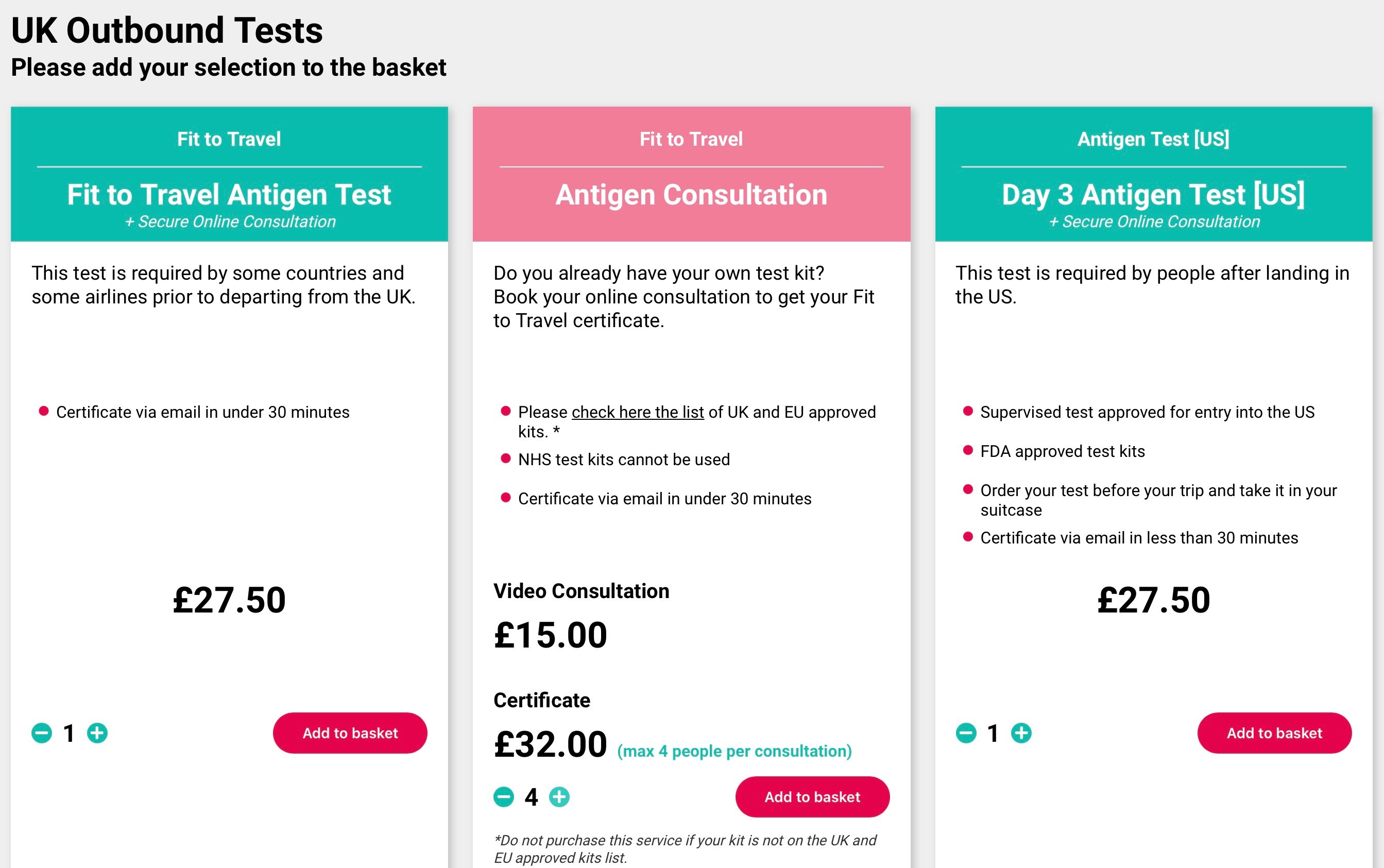 DocHQ have a list of all accepted tests they will supervise, and having used and liked them before, I decided to go with FlowFlex nasal tests. Boots delivered them the next day.

You first select the date you are travelling, and it shows availability levels for the 2 days before you fly,

I booked ours 4 weeks before flying and there was high availability, although it’s disappointing you can’t see the actual time slots available until after purchase (example availability levels below) 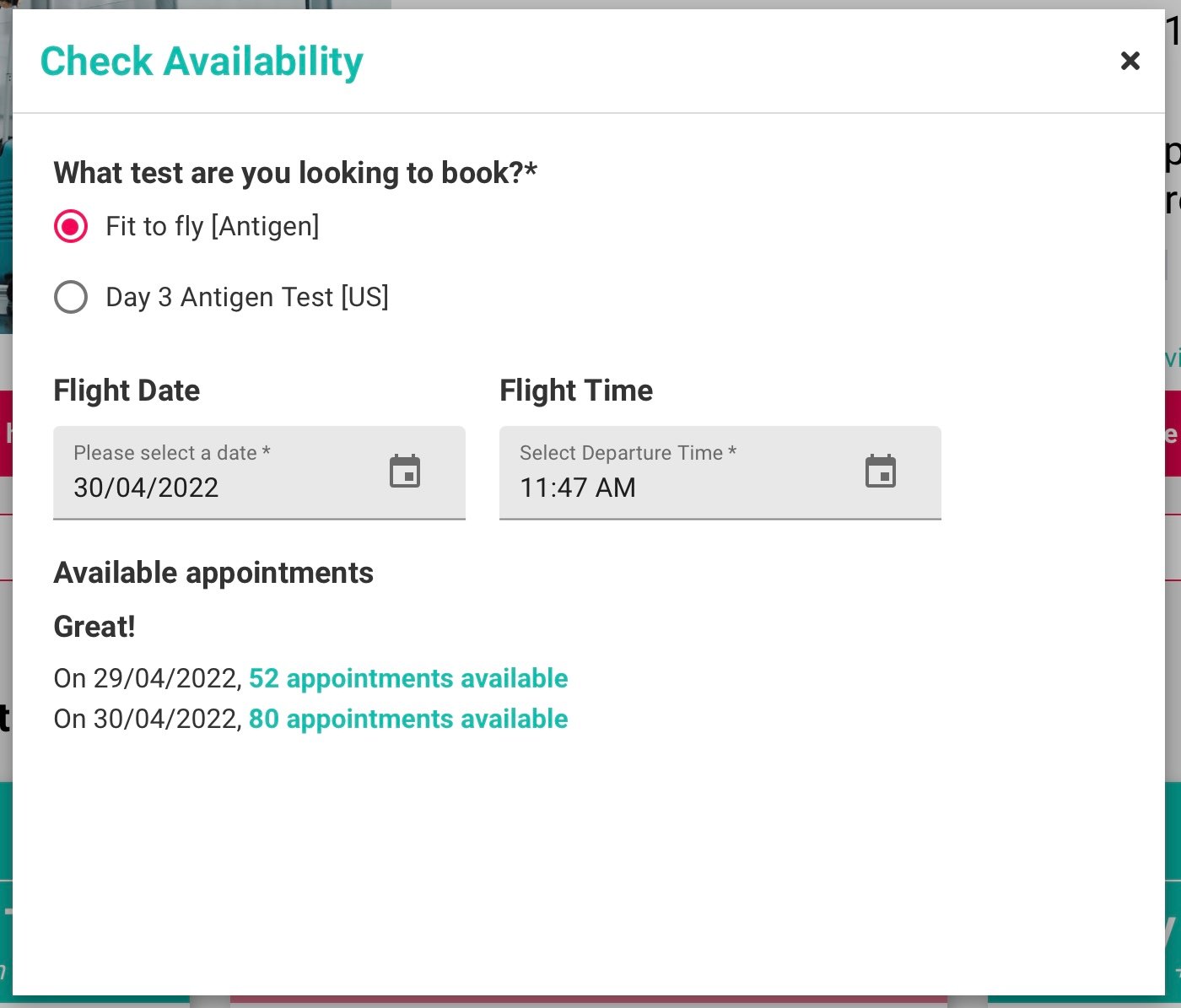 You choose at this point to either use their full service, or add their video and certificate option to tests you already own - as mentioned above, I did the latter, adding one video call and four certificates.

The site automatically added a 30% off discount code for me, but I’ve noticed since that it doesn’t always do that, so use code RETURN30 if not.

It was then an easy checkout process, and I went on to book the appointment - the slots started from as early as 7am but I chose 8am, as I wanted us to test immediately beforehand so we knew what to expect on camera…

I didn’t want to break down on the video call if blindsided by a positive test!

On the day we were up nice and early, bright-eyed and bushy tailed!

We got up tired and cranky, and the youngest didn’t wake up at all - we had to fetch him down and prop him up half asleep while we did the practice test!

Around 8 minutes before our call time we clicked the link in the reminder email/text messages as instructed.

It opened a web-based interface - meaning no software is required (Zoom, Teams, etc) - and within 30 seconds a lovely lady from DocHQ joined us.

I won’t lie, for the next couple of minutes there was frustration and then real fear that the tests weren’t going to happen…

Because it appeared she was, whilst clearly at home, using a mobile phone internet connection for her computer rather than Wi-Fi, and it froze every couple of seconds to the point of being unusable.

At first we were all “It’s fine, don’t worry!” thinking it would settle down in a moment…but when it didn’t, and there was no improvement after we had both left and re-joined the call, I was getting inwardly irked - through no fault of the representative or DocHQ it must be said, and I would never take it out on them.

I began to panic that we wouldn’t be able to do the tests, and would need to implement our Plan B - testing at Manchester Airport…

Luckily she also had a Plan B!

Because she could see and hear us fine, and the issue only affected what *we* saw and heard, she had us turn the volume down on our end of the video call and called us on my mobile - we popped that on hands free and that’s how she issued instructions.

Thank the travel gods it worked!

We could now get started…

She had us unseal and open our test boxes where she could observe, on camera, then take the tests - we could’ve done all 4 at once as far as she was concerned, but to avoid chaos we did the adults first then the boys.

To keep organised I had put 4 pieces of paper on the table with our initials on, and put all the tests bits for each person on their piece of paper. She was impressed and said we therefore didn’t need to put our initials on the test cassettes.

We knew how to use the tests so she had us just follow the normal FlowFlex instructions, but if we hadn’t known she would’ve talked through the steps for us.

Once we dropped the liquid in the test cassettes we brought in the kids and they did theirs (they’re 7 & 8 and used to doing their own tests - they weren’t as thorough as us but she was perfectly happy and said they were better at it than many adults!)

After we’d all done our tests she confirmed our passport numbers and DOBs then left the call saying she’d be back in 15mins, and would call my mobile back at the same time.

An anxious 15mins later and all was beautifully negative - woohoo!

She came back and checked all our results - you hold them up to the camera, then do the same with your passports - then she immediately issued the certificates.

These came via email and she stayed on the call while we checked the information within them.

All was perfect - we were going to America!!

It was far cheaper than the standard-setter Qured, and other than some connectivity issues (which could happen with any provider’s employee, as they’re pretty much all working from home) it went very smoothly.

i particularly like the ability to supply your own tests, keeping the costs low, and how they stay on the call until you both receive and (triple-) check the all-important certificates.

Their Customer Service is very good. Not outstanding, like Qured, but definitely good enough in 99.9% of cases.

If you have any questions about something I’ve not mentioned please do reach out (using Instagram or Facebook to do so will ensure the speediest response) - if it’s information others will find useful I’ll add it into this post too.

Virgin FlyReady Review will follow in a few days…

Infographic Guide to Vaccination, Testing and Paperwork for USA Travel

We won't send you anything you haven't signed up for, and will only email when we have new content to share with you. You can unsubscribe at any time.